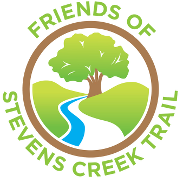 The Friends of Stevens Creek Trail promotes community pride and involvement in the completion, enhancement and enjoyment of the Stevens Creek and Permanente Creek trails and wildlife corridors.

Santa Clara County Parks (SCCP) in collaboration with the Friends has now installed Stevens Creek Trail (SCT) medallions on the 3.5 miles of Stevens Creek/Tony Look Trail in Stevens Creek County Park. In November 2022, the Friends and SCCP placed medallions along the trail from the north trailhead at the park entrance to the current end of the trail at Canyon Road. These medallions join the set installed earlier this year in the Midpen Monte Bello Open Space Preserve. Medallions can now be seen along over 8 miles of the Stevens Creek Trail, continuing to help unify all the trail segments from Monte Bello to Shoreline At Mountain View. The full SCCP announcement of this new achievement can be viewed here, on their website .

Photos of the new 3-inch trail medallion and accompanying directional arrow(s) both in the field and on an example post.

On October 27, 2021 the Midpeninsula Regional Open Space District (Midpen) Board of Directors approved the Stevens Creek Trail designation for three trails within Monte Bello Open Space Preserve. With this approval, Midpen was set to be the first agency to install the new Stevens Creek Trail (SCT) medallion as the official symbol to identify and unify the trail in Santa Clara County. Developed in collaboration with local public agencies, the medallion is designed to highlight the Trail as it follows the Creek from the Santa Cruz Mountains to the Bay. All SCT jurisdictions can add this distinct symbol to their own unique signage along existing or planned trail segments.

Our goal has always been to complete the Stevens Creek Trail from the mountains to the bay, following Stevens Creek as closely as possible. Over the past few years we have expanded our focus from the urban area in the cities of Mountain View, Sunnyvale, Los Altos and Cupertino to include the upper watershed managed by Santa Clara County Parks (SCCP) and the Midpeninsula Regional Open Space District (Midpen).

The October 27th, 2021 Midpen action has several parts. It officially dedicated the approximately 2.7 mile White Oak Trail at the top of the watershed as a primary trail route as part of the Stevens Creek Trail. It also dedicated the approximately 1 mile Stevens Creek Nature trail as an offical Spur Trail and the approximately 0.5 mile Skid Road Trail as an official Regional Connector Trail between SCT and the Bay Area Ridge Trail. These trails will be identified as part of the Stevens Creek Trail on future map publications and Midpen will be installing the new trail medallions and directional arrows at multiple points along these trails. With this dedication, the full extent of the trail is now clearly established, from the Mountains to the Bay, and we are hard at work to connect it all with further dedications and more trail being built.

You can also read about this in Midpen's November Newsletter in the Trail Tales section. You should be able to find these medallions out on parts of the Trail by mid-2022; we will continue to share project updates.

Virtually travel the Trail as of Summer 2021 to see examples of where these new signs will go!

The trail symbol is part of a larger FoSCT project to develop uniform signage for the Trail that promotes usage, interest and support. A working group of all the Trail jurisdictions, led by FoSCT, guides the effort. Developed in collaboration with working group members, the medallion is designed to highlight the Trail as it follows the Creek from the Santa Cruz Mountains to the Bay. All SCT jurisdictions can add this distinct symbol to their own unique signage along existing or planned trail segments.

Benefits of signage include:

Why is this logo different?

The medallion logo serving to join together the current and future sections of the Stevens Creek Trail is derived from the Friends’ logo since it’s a recognizable and relevant symbol.

The Trail medallion has been optimized for outdoor use through the use of solid, darker coloring to protect against fading and enhance readability as well as maximizing the size of the logo while reducing white space for improved visibility from a range of distances.

The new medallion logo primarily represents the Trail and the Friends are excited to see it mark all available routes in future, now that the various jurisdictions have endorsed its use (August 2021).

The new trail logo and the Friends organization logo.


When will the project be completed?

What if I find a damaged or missing medallion?

You can use this form to report damages that need to be fixed - thank you for taking care of our Trail!

We are currently in what we call "Phase 1" of the signage project. This involves getting the current open sections of trail identified with the new trail medallion and providing wayfinding when needed at junctions.

Later phases of our Signage Project may include, for example, adding QR codes that link users to relevant Trail information sites, and creating larger info boards to be placed along the Trail at key locations, as already exist along some segments in Mountain View.

Interested in helping us build a better Trail? Head over to Volunteer or Donate!


If you have any questions or suggestions about the new signage, contact us.